A Little Humiliation and a Coat Hanger Goes a Long Way 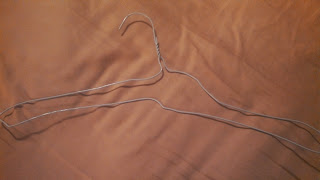 80 licks with the coat hanger to the tits...that's the lot I drew Monday evening...
After cleaning the dishes after dinner Monday night, Master informed me that we needed to run to Walmart to return something.  Innocent enough I thought...we were just getting out of the house alone for a few minutes.  That is until we get in the car and He presents the clothes that I am to change into before we go in.  Have I mentioned that this type of public humiliation is not my favorite?  Pretty sure I have...LOL!
Anyways, we pull up in the parking lot and He leaves me in the car to change while He goes ahead into the store.  Quickly I strip my nice work clothes and put on a pair of black cheerleader style shorts (and I am not kidding when I say that my ass completely hangs out) and a cut off black t-shirt (with no bra and showing my belly).  The real kicker was the black high heeled boots.  I mean seriously, who goes shopping like that?  I wouldn't be surprised if my picture doesn't pop up in one of the emails with the People of Walmart!
It's time to go in and I don't even make it half way through the parking lot before I am already objectified by perfect strangers...and quite mortified.  A man in a truck pulling out of his parking space yells at another guy trying to walk to his car, "If you don't stop looking at THAT, you are going to get run over!"  And that wasn't even the half of it.  Literally, there were people that walked by me only to turn back around and walk by again as I went through the store trying to find a couple of the new implements that Master is adding to His arsenal for this new spanking "game".
As soon as we got back home, He took me upstairs for a my destiny with the coat hanger.  Actually, I was pretty thankful that this implement was drawn first because it is definitely the one I dread the most.  While standing in the display position, He started with a few light taps to each tit and then gradually increased the force until I started to cry, yelp, and dance in place which was somewhere around 50.  He debated whether to stop, but ultimately decided that I drew 80 and that's what I would get but He did take it much easier the last 30.
As soon as He was done, I was ordered to get on my knees and suck His cock, which was already hard with anticipation.  Sucking as vigorously as possible, He continued to humiliate me by asking if I enjoyed my attention from the "coat hanger".  I tried to answer NO but He continued to ask until I nodded YES.  He finally pushed my mouth away from His cock and finished Himself, only using my mouth to deposit His load.
Helping me up from the floor, He then guided me over to the bed.  Thinking that I may finally receive some attention from Him, He delivered the crushing blow that if I needed release I may do it myself.  I couldn't even control myself at this point...tears instantly welled up in my eyes and continued to stream down my face as I laid there using my fingers to massage my clit to orgasm while He simply watched.

Now I admit, my attitude hadn't been the best lately, feeling that somehow I was not getting enough attention from Him.  After all was said and done that night, I was still a little upset.  But honestly, by the time I woke the next morning, I found I was in a better frame of mind, more focused and emotionally settled,  than I had been in several weeks.

The message was received loud and clear.  While I may ask for attention, Master maintains control over where, when, how, and by whom it is given.  .

By the way, just in case you ever wondered...a toilet bowl brush (unused of course) on the tits is now feared just as much as the damn coat hanger!  All those little pricks from the bristles sting like hell the next morning in the shower.  Two nights in a row to the tits...and then tonight I was (un)lucky enough to draw 75 to the nipples with a fly swatter.

Only 3 nights down and so many more to go...