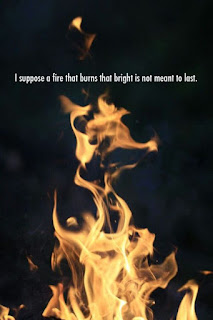 This post has been a long time coming, especially for those who are maybe curious as to the status of Chrysalis and I.  See...this is why I sometimes hate putting things out in the atmosphere, especially when those things seem almost too good to be true.  So many times it comes back to bite me.

Don't get me wrong.  The experience isn't anything I regret and I hope that we will be able to continue our friendship. But I think it's safe to say at this point, that's where it will stay.

It's been two months now and physically, things never progressed since the night I was with her and her husband.  Part of it is my fault because I dug my heels in not long afterwards.  We had set out, or so I thought, to pursue more of a one on one relationship.  Somewhere, the waters got muddied for them, but being with both of them wasn't a pattern I was comfortable with nor intended to continue.  I made my feelings known and then stayed true to myself.

Her situation wasn't as stable as mine which in hindsight...a huge learning lesson! Getting involved with someone, when the foundation of their main relationship isn't solid, is a recipe for disaster.  And because of their issues, unless he was directly involved, there was just a level of uncomfortability there on his part in sharing her with me.  I have tried hard to believe this to be the reality because the alternative, that for them...this was always about me joining them, is painful to deal with. And even though her expressed desires matched mine, the part of me that finds it hard to trust has won that internal debate.

It was obvious how hard I had fallen, which is frustrating because I knew better...at least the old me would have known better.  Once I realized just how much I had put myself out there for her, and how vulnerable that made me, the walls began to go up.  I only meant to keep my guard up, to protect myself from getting hurt and to be able continue in the relationship in a "friends with benefits" fashion.

It became more and more obvious to me as time went on, even talking to her regularly, that I just couldn't get things back on the right track.  The emotional ups and downs were wearing on me.  There was no time really afforded for just the two of us to spend together.  Without her being in a position to nurture the "benefits" aspect of our relationship, my physical desire just lost momentum and withered. It's taken a while for both of us to accept and come to terms with things as they are, but I think our conversation yesterday finally confirms that we are both making steps to move on.

Heron has been an absolute rock throughout all of this.  He has listened when I needed to talk or rant....been a voice of reason when need be...held me when I needed a shoulder to cry on...and even provided plenty of discipline and direction when it was time to refocus.

Thank you also to my friends out there who have been so supportive and helped me in so many ways.  You all know who you are:)

I guess we burned bright for a moment, as true passion often does. But that flame tends to go out as quickly as it was ignited.  It's cliche I know...but so very true.  It was a learning experience for sure and I think I have gained a much better understanding of myself and how to approach this type of situation should it ever present itself in the future.