Have I Made My Point?

Friday night, as I was enjoying the taste and feel of Him on my lips, He began questioning me about the bathroom floor. There wasn't much I could say except to admit that I hadn't cleaned it.  It wasn't that I had been neglectful or forgetful.  I just hadn't done it yet that day. But it was too late.  He had already seen it and taken care of it Himself.

He informed me that the next day I would be cleaning it, every inch of it, with my tongue.  AND I would do so completely naked and lying flat on my stomach on the cold tile.

Oh, this didn't sit well with me.  I continued working to please Him with my mouth but my mind was reeling.  I don't know what bothered me more, the form of punishment or the timing of it as we were supposed to most of Saturday alone together.

Why did He put me off tonight, with promises of play tomorrow, only then to decide to punish me?

After He found His relief and lay drifting off to sleep, I was left even more frustrated and upset with questions swirling around in my head. When I tried to ask Him something specific related to this punishment, He just said we would talk about it the next day.  Needless to say, it took me quite a while to fall asleep.

Of course, my unresolved feelings carried over into the next morning and He demanded to know what was wrong.  I didn't say much other than it had to do with the punishment. He chuckled a little and asked again if I had cleaned the floor.  I just shook my head no and stared out the car window.

After little one's soccer game, we shuttled her off to her cousins and decided to go grocery shopping.  The whole morning was so tense and was certainly not shaping up to be the day alone that I had hoped for. At one point, I thought maybe I had pissed Him off but He said no, only that He was hungry.

He hadn't mentioned the punishment again so after we ate some lunch, I asked if I could please go ahead and get it out of the way so that I could stop worrying about it.  Our bathroom is big enough, I just knew it was going to take me every bit of the last four hours that we had alone anyways.

Of course. It's your punishment.  There's nothing stopping you.

In my mind, I imagined myself stomping all the the way upstairs like a petulant little child and slamming the door.  Of course, I didn't because that would have meant a whole lot more trouble. I couldn't find it in me to handle this one with much grace apparently.

I moved the bathmats off the floor, then removed my clothes and got a washcloth, just in case I needed to wipe my tongue off.  I didn't know if He would have approved of the washcloth but He hadn't specifically said not to use one:)

Staring down at the white tile, feeling it's cold against my flesh,  I fought the urge to cry.  It took a while before I actually found the courage to make myself take that first lick.  When I finally did, there was a pretty overwhelming urge to gag.  The toilet is in it 's own little closet and I was no where close to it but I still found myself hoping that I would somehow get sick. Maybe that would make Him feel bad.

Yeah...I did say I wasn't handling this one with much grace, didn't I?

Then, I just decided the only way to get done was to just blocked out all the crap floating around in my head.  I had only cleaned about 12 tiles (each one about 6 inches by 6 inches) when He opened the door and stood there...

Making me very uncomfortable and more humiliated than I already felt, if that was even possible.

I continued licking the floor as He came over and crouched down pushing His fingers between my legs.

That's what I thought!

He stood back up and, after delivering a few strikes to my ass with the new leather strap, told me to get up and lay on the bed.

Have I made my point or do I need to make you clean the rest of the floor?

Yes, Sir...you made your point.

And just like that, punishment was over and you better believe I was pretty thankful.  In fact, my giddiness almost got me in trouble again.  Thankfully, I keep my bathroom pretty clean.  I only randomly picked stuff out of my mouth for about an hour. 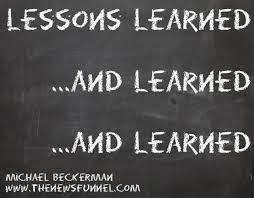