Punishment finally came last night. So today, we start with a clean slate.  Standing in the middle of the bedroom, with my pants down to my ankles, and my fingers laced together behind my head, He  delivered 5 quick, but stinging, strikes with the thin bamboo cane across my backside.  One swat for each minor infraction accumulated over the past several weeks.  It wasn't the harsh punishment I had been dreading by any means.

Afterwards, He told me to pull my pants back up and decided we were going to make use of the warm temperatures and go for a late evening walk.  It was going to be a quick walk but one of the kids wanted milk so we decided to race the clock and see if we could make it to the grocery store before they closed.

What started out as a quick walk ended up being four miles round-trip and took nearly an hour.  With Heron's extended illness, my monthly visitor, and our recent trip, it had been over 3 weeks since He had used anything other than my mouth and by the time we got home and hopped in the shower, I had already begun resigning myself to being patient yet another day.  I figured after the oral services He received the previous night and again earlier yesterday morning, He might not be in the mood for any more physical activity, particularly after the walk.

Oh, but how wrong I was.  It's amazing how much more energy we have when work isn't stressing and draining us!!

Standing beside the bed, He slowly removed my clothes and pushed me back down onto the bed.  Tweaking each of my nipples, He added clothespins to each and began rubbing His hands all over my body, my flesh responding with chill bumps everywhere He touched.  Finally, brushing across my clit, He began massaging it first with His fingers and then with the soft, warmth of His tongue.  His right hand reached up and pinned me to the bed by my throat. 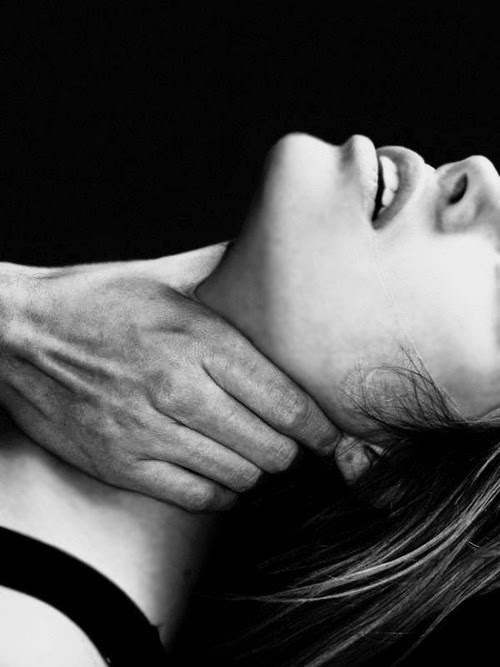 I was a hot mess already and it wasn't long before I could feels the waves of my pleasure beginning to build but He abruptly stopped, asking if I had any wife-beater tank tops.  I couldn't for the life of me figure out why He would need one, but I pointed to my sock and underwear drawer.  He pulled one out and Had me stand so He could put it on me.  Then, He resumed working me with His tongue until I was close to the edge yet again.

And again stopped.  This time, He reached into the bedside drawer, pulling out the capsaicin cream.  Rolling the shirt up, He rubbed a finger-full of cream around each of my exposed nipples and then pulled the skin-tight shirt back down, massaging my nipples through the cloth.  The added friction instantly increased the intensity of the burn.  He picked the clothespins back up and carefully placed them on the very tips of my nipples through the outside of the shirt.  I couldn't tell which hurt worse, the burn or the pinch but I was squirming and yelping until He ordered me to be quiet and put my arms out spread-eagle.

Trying to relax and breath through it, I stilled myself while He pulled my lower body to the edge of the bed and pushed His already hard cock into the wetness between my legs.  All the sensations melded into nothing but pleasure at that point and there was only heat building everywhere in my body. He butterflied my legs in between us as He continued thrusting in and out while massaging my clit with His fingers.

Bet you didn't see that one coming?! (haha...pun intended)

Well, neither did I!  My pussy continued contracting but with nothing there, I guess it's what you would call the female version of a ruined orgasm.  I could have just cried.  He couldn't even force Himself back in. It was sealed up like Fort Knox down there.  After waiting over 3 weeks, I couldn't believe it went so wrong at the last minute.

Thankfully, He was feeling generous and kept going allowing me long enough to build up to another, this time climbing on top of me so I couldn't push Him out.  It's pretty unusual that I am able to achieve two during sex, but I guess that's the beauty of having gone without for a while.  My body was no where near done and the second was just as intense, if not more so!

By this point, I had almost forgotten about the cream on my nipples.  He had long since taken the clothespins off and the burn had somewhat subsided.  But He laid down on His back and told me to ride Him.  And while doing so, He wanted to watch me rubbing and pinching my nipples through the shirt, again activating the heat in the cream. Watching me bring discomfort to myself drove Him to His own release.