The kinky play this weekend was plentiful, that's for sure.  Heron is obviously making up for lost time.  I don't know when I might finish this post, but right now, it's Sunday and my body feels like a battlefield.  In a good way of course.  And my mind, well it's blissfully quiet.

You can read about Friday's adventure in Pulled in All Directions.  Saturday, well, that's what I intend to try and describe in this post.  Maybe the next 2 or 3 posts actually.  And then, there's whatever He's planning for tonight.

HOLY COW!! A girl can only handle so much:)

Nothing so far, has been so intense that I couldn't handle it. A bit painful at times but yesterday was long, like several scenes over several hours long.   So, I'm feeling it everywhere today.

The night started with Heron cooking a wonderful dinner.  He said it would be necessary to keep up my strength.  Buffalo steak, salad, and naan bread.  A perfectly meal, not too light and not too heavy.  I thought it odd that He wasn't eating though.  I asked a couple of times and He just told me not to worry, He would eat later. So I shrugged it off thinking that maybe He didn't want to be working His domly magic on a full stomach.

After my food had settled, He took me upstairs and I removed my clothes.  When I entered the bedroom, I saw the Power Tower in the center of the room with a chair underneath.  I was tied up just like the picture below.  Sometimes, He draws inspiration from photos and this photo just happened to be the inspiration for the first scene of the night. 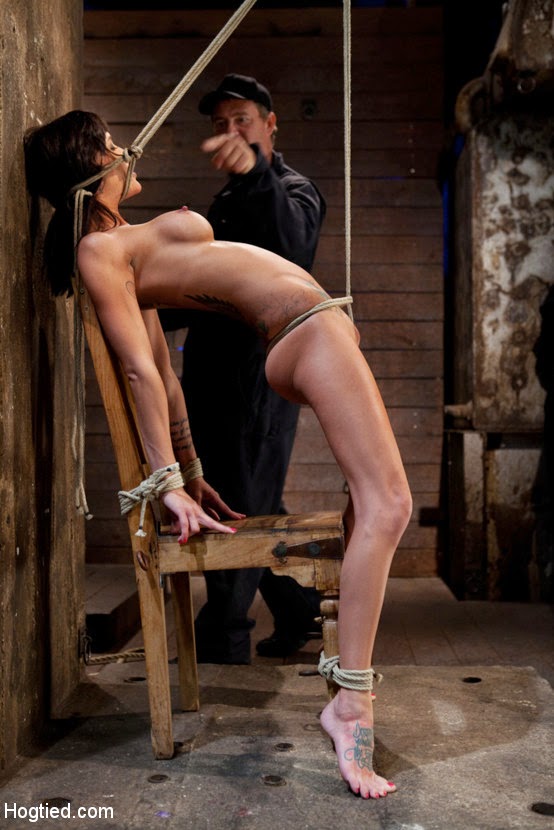 Once I was all tied up, He hoisted the rope as tight as it would go between my legs.  I can't even begin to describe how uncomfortable the coarse rope was nestled deeply between my folds and up my backside.  Actually, nestled is too nice of a word...I think the more appropriate description would be that it was cutting my lower body in half!!

Picking up the leather strap, He walked over and stood in front of me with that big grin that both scares me and makes me melt all at the same time.  He commented about how swollen my pussy already was and used the opportunity to slap it several times in rapid succession.  But each time I flinched or tried to pull away, the rope only dug deeper.

Picking up the crop next, He flicked mostly at my tits and nipples and threw in a few strikes down below for good measure. But every so often, He would reach up and tighten the rope, each time forcing me higher on my toes in a fruitless attempt to retreat from the pain in between my legs.. Before long, I was writhing about, yelping and begging Him to stop.

Grabbing my hair and pulling my head back, He used the cane, bringing it down several times across the tops of my tits.  Thankfully, He finally put the cane down but not before He turned His attention to my pussy and thighs, leaving me with a couple of bright red stripes.

There were several other implements, most of which I hated.  But I have to admit, there was one I enjoyed, and that was the fillet knife.  Instantly, my body flooded the rope with moisture. And this time when He pulled my head back, I was warned not to move an inch. As He whispered in my ear, the tip of the knife traced the curves of my body, slowly...carefully.  My breathing slowed and deepened and I was quickly about as lost as I could ever get.  Nothing mattered in that moment except the blade as it danced across the flesh of my neck...my chest...across my nipples.

After kissing me deeply, He set the knife down and freed me from my bonds.  He told me to go to "my place".  So, I laid down on my side of the bed, anxiously awaiting whatever He planned next.